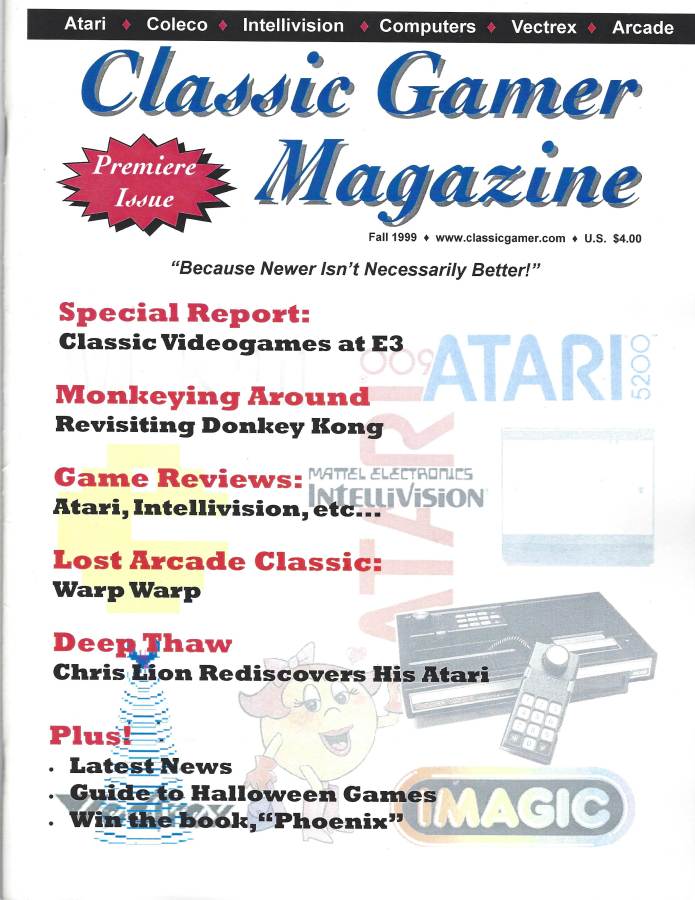 The number of retro gaming magazines that have appeared can be counted on one hand.

The first magazine that was devoted strictly to retrogaming wasn’t even a professional magazine at all. Classic Gamer Magazine, which debuted in the Fall of 1999, was the self-published brainchild of Chris Cavanaugh, a long-time fan of the original Electronic Games magazine and its editors, Bill Kunkel, Arnie Katz and Joyce Worley. The magazine’s articles were interesting and well written and its format was similar to the beloved Electronic Games. By the end of its eight-issue run, it even included Bill Kunkel as a columnist. Despite its self-published status, the magazine could be found for sale in Tower Records stores. Classic Gamer Magazine could be considered a forerunner to Old School Gaming Magazine. Three of its contributors, myself, Michael Thomasson and Brett Weiss, are regular columnists for this magazine. Classic Gamer Magazine lasted for six issues, with the final edition dated Spring, 2001. However, Cavanaugh issued two free digital-only editions, Volume 2, issues 1 and 2 in April and July of 2004 respectively. And then after a six year hibernation, the first issue of volume 3 was released in the fall of 2010 also as a free digital download. Although a new issue hasn’t been published in eight years, those of us who still view Classic Gamer Monthly as one of the best independent magazines ever available on the subject, are still hopeful that a new one will again suddenly appear.

The first professional magazine about retro games was the British Retro Gamer, which carried a January, 2004 cover date. The first ten issues of this over-sized slick magazine came with a CD full of shareware games.

In the United States, several slick retro-themed magazines were published over the years, following the success of Retro Gamer. The first was Manci Games, which claimed to be the “First Retro VideoGame Magazine & Price Guide!”. Manci Games also introduced two columns that continue today in Old School Gaming Magazine, Michael Thomasson’s “Just 4 Qix” and my own “The Game Scholar”. Editor-in-Chief Jansen Mercer had big plans for this magazine, which was actually named for his goal. He hoped that the success of the magazine would eMANCIpate him from his corporate job. Alas, the magazine only lasted two issues.

With a cover date of summer 2004, Video Game Collector, debuted shortly after Manci Games. Published by Shawn Paul Jones, the slick, full-color magazine While half of this 46-page small-sized magazine (7” x 9.25” – a standard magazine size is 8.5” x 11”) was dedicated to the price guide, the rest featured reviews of retro games and articles of interest to classic game fans. Each issue also featured a Collector’s Spotlight, and the spotlight of the first issue was centered on Youtube star the Immortal John Hancock. The magazine went to full-size with #5. The magazine lasted through 11 issues with the final issue being undated but coming out in 2009.

Video Game Trader, which debuted in late 2007, actually began as a price guide. But the second issue, Volume 2 #1, which was published in February 2008, was a full-fledged magazine. Video Game Trader followed an unusual schedule. It was to be published monthly, but would only be available as downloads, except for the quarterly issues, #4,8…, which were available in print. The dimensions of the print editions were even smaller than the original Video Game Collector, 5.5” x 8.5”. Beginning with #9, the magazine became available in print every month. And beginning with #13, it went to the standard magazine size. I joined the magazine as editor with #13, a position I held for 10 issues. Afterwards, the magazine switched back to a download edition only and then stopped publishing after #35. However, 35 issues wasn’t bad for a magazine that wasn’t available on newsstands. And it holds the record of the longest lasting retro gaming magazine in the United States.

By October, 2013, most of the mainstream videogame magazines in the United States were gone. Gamepro expired in December, 2011, Nintendo Power one year later, and finally Electronic Gaming Monthly in March, 2013. Only Game Informer, which was subsidized by Gamestop, remained. Meanwhile, it was the complete opposite in Great Britain where videogame magazines thrived. Edge was going strong for over twenty years. GamesTM was about to celebrate its twelfth birthday. And even the retro-themed Retro Gamer was thriving after nearly ten years.

Because of the success of print publications in England, Mike Kennedy, who in March 2008 had founded Game Gavel, an online videogame auction site that provided an alternative to eBay, believed that a print magazine with the right talent and quality could also succeed in the United States.

Kennedy’s idea was to assemble many well-known writers from classic videogaming magazines, such as Electronic Gaming Monthly, to produce Retro, a high-quality print magazine that would be aimed towards sophisticated gaming fans of all ages. He began a Kickstarter campaign on October 4, 2013, that sought to raise $50,000. And although many people scoffed at the idea of a new print magazine in a digital age, by the end of the campaign, 2,345 backers had pledged nearly $76,000, which proved that there was a definite interest in such a magazine. In addition, a digital version of the magazine was offered. All print subscriptions included free digital editions, and the digital copies could also be subscribed separately.

The first issue came out in January, 2014. By the end of the year, Kennedy claimed that Retro’s circulation was 40,000 readers from 35 different countries. Unfortunately, Retro’s release schedule was erratic and even when issues were printed, many subscribers complained that they never received them.

Despite this problem, Retro may have succeeded. The magazine was carried in Barnes and Nobel, which exposed it to thousands of casual magazine readers. Unfortunately, publisher Mike Kennedy decided to overextend himself by announcing a new game console called the Retro Video Game System. This system, and its follow up, the Coleco Chameleon, became the laughing stocks of the retro videogaming community, and Kennedy’s reputation in the industry evaporated. In July, 2017, VGBrands, the parent company of Piko Interactive, a developer of new games for old systems, announced that they had purchased the rights to Retro magazine and Game Gavel and that a new issue of Retro would be available in the fall. However, the magazine would only be available in digital form and if demand for a print edition existed, then a print version would be published. As promised, the digital edition of issue 13 was released in October. Piko Interactive then announced at that time that a print edition of the magazine would be available through Patreon if $5,000 (1,500 subscribers) could be pledged. That issue was finally delivered in July, 2018, a year after it was first announced. Now with issue 13 in the can, there has been no word about the digital version of issue 14, which may be worrisome since nearly a year has passed since the last digital issue had been available.

Fortunately, there is Old School Gamer Magazine (OSGM) to fill the gap left by Retro. Founded by Ryan Berger, a successful magazine publisher and game collector, at the end of 2017, OSGM had a similar mission as Retro, to cover games and systems that were more than 25 years old. In addition, the magazine featured articles on retro arcade gaming, something rarely covered in modern magazines. The magazine has consistency from issue to issue with regular columnists, a free poster of that issue’s cover art and a price guide for games to a specific retro console.

OSGM followed a different business model than that of Retro. In this case, digital subscriptions were absolutely free. And to get the word out, Berger and his writers attended most videogame conferences to sign up new subscribers. A physical copy of the magazine was handed out for free with every digital subscription placed, and then the subscriber had the option to purchase a physical subscription.

The magazine launched in November, 2017, and followed a bi-monthly schedule, with one new issue being published every other month.

As the world continues to shift to digital, it is refreshing that some publishers recognize that not all readers are interest in this form of delivery. It is fitting that the magazines that cover classic games, are also published in a classic format.