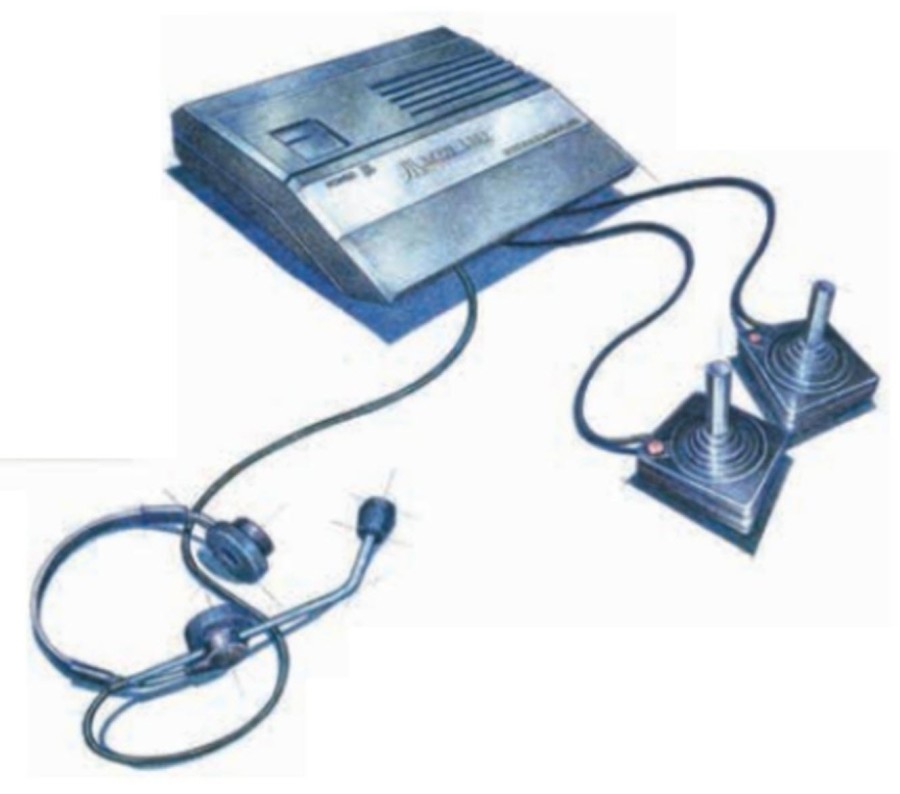 In today’s gaming climate a microphone is practically just as standard as a controller, but it’s usually used for conversations between players. But one goal has always been for verbal interaction, where players could actually speak their commands into voice controller, which would eliminate the need for a hand controller once and for all.

The idea of parsing dialog, breaking down the spoken word, reflects back to an earlier time of text adventures when the computer parsed text that was entered through a keyboard. But as the parsers became more sophisticated, players hoped that one day they could toss away their keyboards and speak their commands directly into the game.

The first console to use voice recognition technology was Milton Bradley’s MBX Expansion System for the Texas Instrument TI-99/4A Home Computer, which was released in the fall of 1983. No, that wasn’t an error, calling it a console and a computer peripheral in the same sentence. Originally, it was supposed to be a console, but after Coleco released the ColecoVision in 1982, Milton Bradley decided that there wasn’t any room in the marketplace for more than two gaming consoles. So they redesigned their system to work with the TI-99/4A.

Voice Recognition was actually only one feature of the Milton Bradley Expansion module, and it wasn’t its major feature. In fact, not all games that were designed for the system even utilized it, and it was optional on those that did. The feature could be disabled and the game could be played using a joystick controller that was packaged with the system. However, if it was used, a few steps had to be taken before the game could be played. Unlike most of the voice recognition systems that would follow, the MBX didn’t parse the player’s speech for keywords. Instead, the system initially displayed words on the screen and prompted the player to say those words clearly into the microphone.

Each of those words represented an action in the game. For example, saying “down” caused the game to respond the same way as if a player pressed the joystick controller down. And the system didn’t really care what word was said. If a player initially said “Yellow” when he was prompted to say “Down”, then the word “Yellow” would cause the same reaction as if the joystick was pressed down.

Milton Bradley first showed off the MBX at the 1983 Winter CES and Atari liked it so much that they partnered with Milton Bradley to create a voice module for the Atari 2600 and 5200. A prototype was built that worked the same as Milton Bradley’s unit, where players had to say keywords into a microphone. The Voice Commander was shown at Atari’s booth at the 1983 Summer CES and then was never seen again.

Shortly following the Summer CES, Atari dissolved its partnership with Milton Bradley and the “Voice Commander” joined Atari’s infamous list of vaporware. Atari never publicly declared why they cancelled the device but people who purchased the Milton Bradley MBX when it went on sale that fall believed they knew why. To put it simply, the voice recognition feature simply didn’t enhance the game. It was much more intuitive to simply press on a joystick then to say a single command out loud.

The MBX was not on the market for too long. Milton Bradley claimed that it was a victim of the videogame crash of 1983, which was probably partially true since Texas Instrument discontinued the TI-99/4A in March, 1984. It would have been difficult to continue selling a peripheral for a product that was no longer being produced. But one has to wonder that if the unit sold well, why Milton Bradley didn’t attempt to make it available for other computers that were available at the time.

Voice recognition took a break for a few years. Then in 1990, Konami released an accessory for the NES that was a combination voice controller/light gun. Although it had been specifically designed to support one game, Laser Invasion, it was supposed to work with any game that used the NES Zapper. The LaserScope wrapped around the player’s head and covered his ears like earmuffs. A slim microphone extended out in front of the player’s mouth. Another extension came out over the player’s forehead and rested in front of his eye. Attached to this eyepiece was a plastic shield with a set of crosshairs painted on. By saying the word “fire” into the microphone, the unit would shoot light at the TV screen, just as if the player pulled the trigger on a light gun. Unfortunately, the device only recognized the one command, and sometimes it confused background noise caused with the actual command.

The next voice module appeared in Japan in December, 1998. It was packaged with Nintendo’s Pikachū Genki dechū. The player spoke into the required N64 Voice Recognition Unit (VRU) through an attached microphone, which parsed the sound for key phrases that then caused Pikachu to react a certain way. The VRU was compatible with only one other game; a train simulation called Densha de Go! 64, which Nintendo of Japan released in 1999. However, in this game the use of the VRU was optional. Pikachū Genki dechū was released in North America two years later as Hey You, Pikachu!, which was the only game in North America that used the VRU.

Around this time, Sega released a similar game in which the player talked to the onscreen characters in order to progress the game. And like Hey You, Pikachu!, Seaman was packaged with a microphone peripheral, in this case, the Dreamcast Microphone, which loosely resembled a Sega Visual Memory Unit (VMU). Seaman was the only game released in North America that required the Dreamcast Microphone. Mr. Driller, which had been released for the Dreamcast a month earlier, allowed players to speak softly into the microphone to cause Mr. Driller to drill, but it was optional. A third game that used the Dreamcast Microphone in North America was Alien Front Online, which came out a year later. However the microphone was only used so online players could communicate with one another, which became the primary purpose for peripheral microphones that followed.

Since Milton Bradley’s voice module was part of a larger expansion module, and Atari’s Voice Commander had never been produced, an actual voice controller had never been released. At least not until 2000 when Taito released its Speech Recognition Controller for the Japanese PS2. The Speech Recognition Controller consisted of a triangular device that a headset plugged into, which itself plugged into one of the PS2’s USB ports. The controller was packaged with a soccer game, Greatest Striker, where gamers could tell the system to navigate through menus. Once the game began, verbal commands such as “pass” or “shoot” could be used to make the players on the field perform. Over 40 commands were built into the system, and players didn’t have to initially speak the words into it as they had with the Milton Bradley unit. A second game that used the controller, a Mahjong simulation called Mahjong Declaration,was released at the end of the year, and no more games followed. Apparently, Japanese gamers found the voice commands to be a hindrance as did their American counterparts 17 years earlier.

The failure of Taito’s Speech Recognition Controller marked the end of voice controllers and voice modules for videogame consoles for some time. Voice recognition, however, lived on. In 2001, Seaman was released for the Japanese PS2, and was packaged with its own controller that featured a built-in microphone. But a controller with a microphone was nothing new. Nintendo had done that back in 1983 with one of the Famicom controllers so players’ voices could be heard through the television speaker. And a separate unit to parse speech was no longer necessary as the game software itself had the capability to do it.

That same year even the regular controller was deemed unnecessary when Konami released Operator’s Side for the PS2 in Japan (and a year later in North America where it was called Lifeline). This was the first game that operated totally by voice commands, and didn’t use a controller at all. The premise of the game had the player trapped in the control center of a Space Station, while monsters ran havoc outside the room. The only person who the player had contact with was a waitress named Rio and he had to verbally tell her what to do in order for them both to survive.

Unfortunately, the game didn’t play as promised. Konami contended that Rio could understand approximately 500 commands, but in some cases she failed to even respond to commands that she recognized. And the dialog wasn’t in natural Japanese (or English for that matter). In most cases they were simple commands such as “open door”, verbal hold-outs from the text adventure days. A reviewer for the website gamezone.com wrote “It’s a cool concept, and the technology’s there, but it would take ten years to develop a game that had true voice activation.”

Actually it took 13 years. In June 2017, a company called Human Interact introduced at E3 a new VR game for the Oculus Rift. Starship Commander used new complex voice-recognition technology from Microsoft where the player made his way through the game by talking to the characters with natural dialogue. The dialogue was sent to the Cloud where the speech got parsed using a sophisticated algorithm, and if the dialogue makes any sense then an appropriate response was returned.

If this technology performs as promised, then the preferred controller may become the microphone, and conversations with consoles will be the norm.