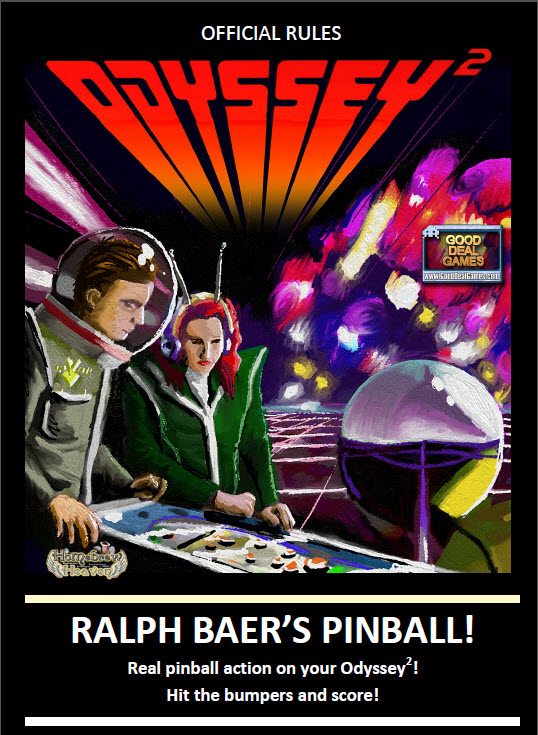 Ralph Baer, who had invented the Magnavox Odyssey, the world’s first videogame console, had nothing to do with Magnavox’s later console, the Odyssey2. However, the company that Baer worked for, Sanders Associates negotiated with Magnavox to develop software for the new console. As a test in Odyssey2 programming, Baer thought to use technology that he had developed for an unmarketed console called Telesketch. The idea behind Telesketch was to enable users to draw symbols on the screen that could then interact with other symbols. Baer’s idea was to create a pinball game for the Odyssey2, one in which the user could add his own workable bumpers.

Baer asked another Sanders engineer, Don McGuiness, to actually program the game. McGuiness completed Pinball! after 3½ months of working on it part time.

Unfortunately, Sanders wound up not developing games for the Odyssey2 because Magnavox had a contract with Ed Averett to develop all games for the console. Averett had been employed by Intel, the company that produced the processor in the Odyssey2. When Magnavox couldn’t come up with ideas for games, they turned to Intel, and Averett volunteered to supply them.

The only copy of Pinball! sat in Ralph Baer’s basement for years. In 2000, Ralph asked me if there was a way we could get it out to the public. I contacted Sean Kelly, one of the organizer’s of Classic Gaming Expo (CGE), who also built and sold multi-carts. He agreed to make copies of the game in time for CGE in August 2000. Thirty copies of the game were sold at the show for $25 each. Ralph Baer attended the show that year and personally autographed the copies. Today, these 30 copies are rare collector’s items.

In early 2014 Michael Thomasson of Good Deal Games/Homebrew Heaven contacted Ralph Baer with the idea to re-release the pinball game and modernize it. He asked me to do the manual, my first in eight years. I decided to use MS Publisher as I had for the prior manuals and I went ahead and designed one that completely mimicked those from Magnavox for the Odyssey2 games. Homebrew Heaven’s version had the original game on it in addition to a new two-player version. I also added Ralph Baer’s story and the origin of the pinball game to the manual. This manual is currently my favorite of all that I had done.

Sometime during 2014, Michael had the front covers to the game container printed and he sent them to Ralph, who signed and numbered all one hundred copies. Unfortunately, Ralph passed away at the end of that year, making these signed copies possibly the last autographs that Ralph ever signed. The game itself was released in the fall of 2015.